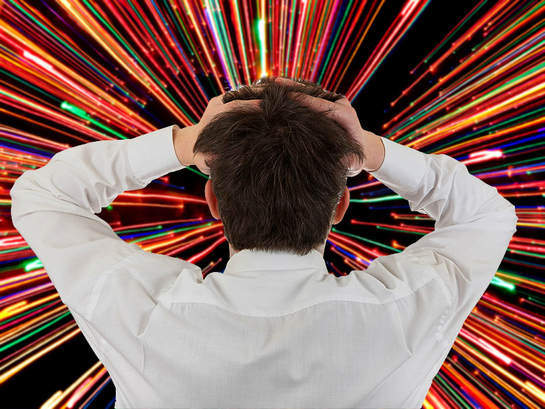 Our thoughts and beliefs about ourselves, other people, and the world around us create our reality. Surprisingly, our core beliefs can be skewed and can cause us a great deal of distress.

The experiences that we have as children shape our perception of our needs in relationships. Growing up and learning to feel unsafe around others emotionally or physically can make us profoundly unhappy and disconnected. There are many psychological disorders that occur as a result of flawed or mistaken perceptions of reality that result from bad social experiences.

Schizophrenia is a thought disorder that results when one separates from reality as a way to cope or as a result of biological changes in the brain. Common symptoms are social withdrawal, lack of motivation, poor performance, depression, emotional flatness, delusions, and hallucinations. Like other thought disorders, improvements often occur most dramatically in supportive environments where one's needs are met. Independent living skills development and employment skills development and among the best treatments.

Eating disorders such as anorexia and bulimia are thought disorders. Both males and females can develop an eating disorder. While eating disorders appear to be related to beliefs about food, they are in fact more about body image and attempts to gain other people's approval.

Personality disorders are characterized by socially maladaptive and enduring patterns of thinking and behaving. Disordered thoughts and beliefs about self and others result in strained interpersonal relationships at home and at work. Personality disorders fall under three categories or clusters from A-C: A) bizarre/ eccentric, B) erratic/ dramatic, and C) fearful/ anxious. Common personality disorders include: Paranoid, borderline/ emotionally unstable, dependent, narcissistic, and obsessive compulsive.

The important thing to keep in mind is that personality can be developed and improved with cognitive behavioral therapy (CBT), it is not fixed unless we refuse to work on it. The root of most personality disorders lies in the unconscious beliefs that we hold pertaining to old attachments and our ability to trust other people and society at large. Understanding how trust can be mended and what can be done to improve coping and reality based thinking will improve overall functionality and reduce the severity of a personality disorder. Mild personality difficulties are not considered disorders, but simply traits or features.

Obsessive Compulsive Disorder (OCD) is another type of thought disorder. OCD is not the same as obsessive compulsive personality disorder (OCPD) in which an individual tends to be meticulous. OCD is characterized by an inability to break free of unwanted thoughts and irrational urges.  People suffering from OCD may experience disturbing thoughts that go against their values. They try to suppress the unwanted thoughts but are unable. Thoughts such as performing a violent act against self or others, or causing a motor vehicle accident, or leaving on the stove and burning down their home are recurrent and upsetting. The individual becomes so anxious that the thought may be realized they commence a series of ritualistic compulsive behaviours to satisfy their urges to prevent any harm. Rituals may be in the form of checking, counting, tapping, or list writing.

Get professional help to meet your needs, discover a healthy you, and learn new healthy ways of perceiving reality. Call 204-299-7334
Proudly powered by Weebly